Curated by writer, curator and documentary filmmaker Daniel Bird, this program of newly restored short films by Paradjanov - Hakob Hovantanyan (1967), Kyiv Frescoes (1966), and Arabesques on the Theme of Pirosmani (1985) - was produced by Hamo Bek-Nazarov Project in association with National Cinema Centre of Armenia (NCCA), Dovzhenko Centre and Georgian Film Studio. The results of the project were revelatory, helping to fill in the gaps of our understanding of the great master's artistic development between Shadows of Forgotten Ancestors (1965) and The Colour of Pomegranates (1969).

Hakob Hovantanyan is something of a warmup for Pomegranates, an associative and evocative study of the paintings of the titular 19th-century artist, while his move toward the cinematic fresco is encapsulated by Kyiv Frescoes, cobbled together from footage intended for a feature - length work about post - WWII Kyiv before the Soviet authorities ordered most of it destroyed.

Arabesques further develop Paradjanov’s interest in the relationship between cinema and painting in the form of an intricately sequenced montage of details from the paintings of the Georgian outsider artist Niko Pirosmani.

The restored films have been printed back to 35mm positive film (courtesy of AGBU, NY) to be included into permanent archive collections of NCCA, Georgian Film and Dovzhenko Center.

In December 2021 Hakob Hovnatanyan was donated to Pompidou Center in Paris, in January 2022 - to MoMA, New York. The films are also available to screen in 4K digital projection.

An installation produced and curated by writer, curator and documentary filmmaker Daniel Bird, features nine wooden tables of different heights, in which a total of twenty-four monitors of different sizes are installed horizontally. Each monitor features an unedited single reel of out-takes from Sergei Paradjanov's Sayat Nova (The Colour of Pomegranates) playing on a loop.

Monitors can be viewed individually, in groups of two or three, or as a whole from above. Tigran Mansuryan and Yuri Sayadyan’s original sound collage plays on speakers while incense burns. The title refers to a quote by Jean-Luc Godard: "In the temple of cinema, there are images, light and reality… Parajanov was the master of that temple".

The installation marked the 50th anniversary of the Armenian release of Sergei Parajanov's Sayat Nova. Production memos reveal how Parajanov’s vision was compromised both during and after editing at both a local and international level. While the Soviet authorities ordered the destruction of all material not utilised in the final cut, over a hundred cans of outtakes survive, thanks to the staff of Armenfilm Studio. The project has been successfully presented during the Rotterdam International Film Festival and in Yerevan's "Ayrarat" cinema hall. 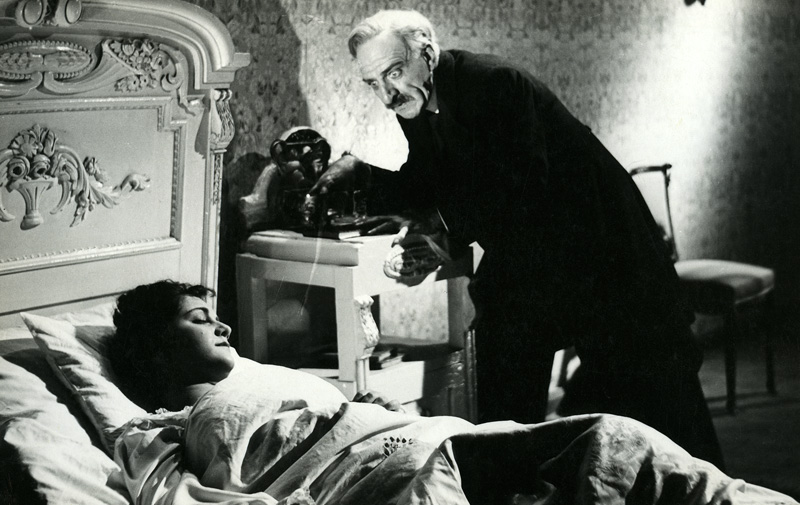 Rediscovered during salvage works at Armenfilm studios in 2020, NCCA's vast collection of over 6000 production stills and other photographic documentation gives an invaluable insight into the working methods, the history and the particular aesthetics of the largest Armenian film studio during the Soviet period.

Moreover, this find also allowed to rediscover a hitherto forgotten genre of Armenian photography - the film still - which has attracted some of the most important Armenian photographers of the 1930s-80s, including Andranik Kochar and Hakob Hekekyan. Curated by Vigen Galstyan (Head of Film Heritage, NCCA) the present exhibition presents a survey of Armenian film still art from its renaissance during the post-war period in the mid 1950s, to the last active years of the Armenfilm studio in the early 1990s. Comprised of over 80 images, this photographic narrative not only charts a visually - expressive path through the twisting terrains of Armenian film history, but also provides a revealing picture of the changing mores and aesthetic perceptions in Soviet filmmaking during the second half of the 20th century.