HOUSE ON A VOLCANO: A REVOLUTIONARY BLAST FROM THE SILENT ERA

The 1928 masterpiece of Armenian silent cinema, "House on a Volcano", was filmed by the founding father of Armenian cinema, Hamo Bek - Nazaryan on location in Baku, Azerbaijan. Presenting the struggles of Armenian and Azeri oil-rig workers against the oppressive control of multi-national oil magnates who ruthlessly exploited the working class at the turn of the 20th century, the film brilliantly combines elements of historical, action, thriller and propaganda genres. Inspired by the work of Sergei Eisenstein and Vsevolod Pudovkin, Bek-Nazaryan managed to craft his own vision of dynamic contemporary cinema by using avant - garde montage techniques and daring action sequences that are still breathtaking in their astonishing realism. Digitally remastered from a new scan of a 35mm positive copy, the film is presented with a new musical score arranged by the emerging British composer Juliet Merchant.

Dedicated to the 130th anniversary of Hamo Bek - Nazaryan, the project has been co - produced by the NCCA in association with the Kinoklassika Foundation and will have its dual premiers in London and Yerevan in September, 2022.

Made five years after the establishment of the Soviet - Armenian film industry, Hamo Bek - Nazarian's 1930 silent docudrama Land of Nairi occupies a unique place in the annals of not only Armenian, but also Soviet film history. Mixing archival materials, staged scenes and observational footage, Bek - Nazarian created a remarkably poetic and kaleidoscopic portrait of Armenia's first decade as a Soviet republic. Bypassing traditional approaches to film documentation, the director achieved an almost surrealistic pitch in what is his most avant-garde work, and an entirely distinctive gem of early documentary cinema. Working in entirely different conditions a decade later, under Stalin's stifling ideological control of the Soviet film industry, Bek - Nazarian managed to continue his exploration of grand humanist narratives in his moving 1942 anti - fascist parable The Daughter. Practically unseen since the days of their theatrical release, both of these films reveal the rich diversity of the director's extensive oeuvre and the profoundly universalist rhetoric underlying his work.

On Hamo Bek - Nazarian's 130th anniversary, the NCCA is preparing new, digitally restored 4K scans of Land of Nairi and The Daughter from archival 35mm positive prints, to be presented as a double - bill for theatrical release in Armenia and international festival screenings. 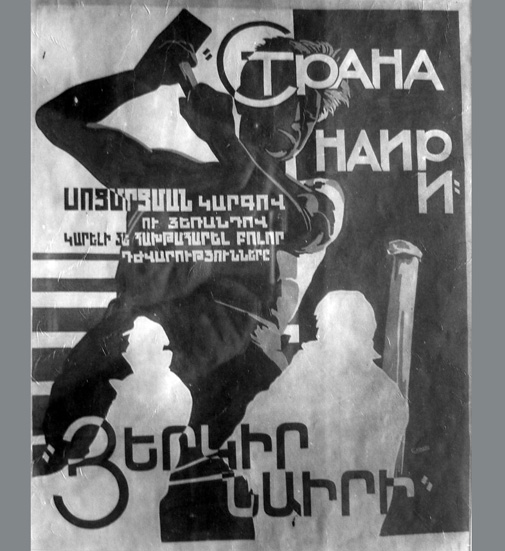