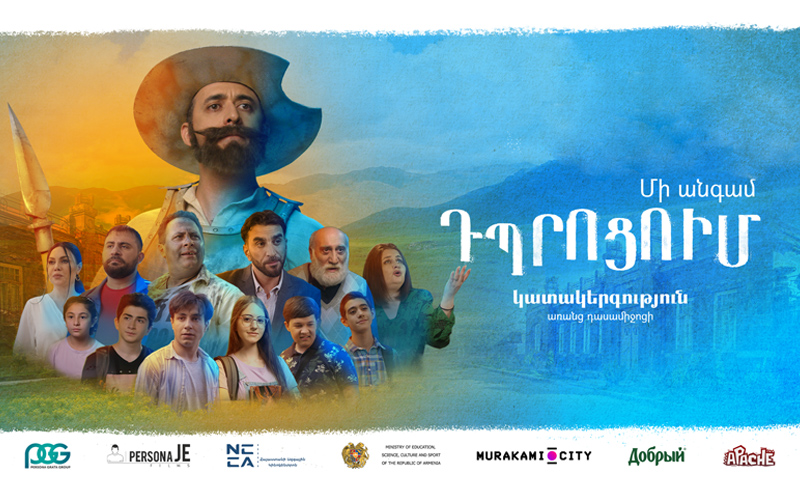 On June 1st in the frame of  the International Children's Day related events the film Once Upon a Time at School by Harutyun Khalafyan will be demonstrated with sign language translation for  deaf -mute children at the Republican Palace of Culture and Sport of the Deaf. The film Once Upon a Time at School was produced by Persona Grata production company with the financial support of the National Cinema Center of Armenia.The initiative to show the film with sign translation is the joint idea of the National Cinema Center of Armenia and Persona Grata production company. The aim of this undertaking is to involve vulnerable groups in public life by creating equal opportunities and living conditions, as well as making various cultural and public programs accessible to them. The initiators of this undertaking  have an intention  to make it continuous.

About the film: Harutyun Khalafyan's comedy is a mixture of historical, real-time and imaginary line-ups. The film tells about a schoolboy, who wouldn’t learn, displays disruptive behavior under negative influence and often gets into the thick of trouble. However, things change once he learns that his school is on the verge of closing. Trying to prevent the irreversible he finds himself in the midst of adventures and overcomes trials to become a true hero.

According to international statistics, 4-6% of the world's population have hearing loss. According to the World Health Organization, 30 million people worldwide suffer from it. The number of deaf-mute children is increasing annually. In Armenia that number approximately reaches 3,500. Since January 1st, 2004, more than 3,500 deaf-mute people in our country joined the audience of the programs broadcast on Armenian TV channels. According to the amendments to the law, public television must broadcast at least one news and one program for children a day with sign language translation or Armenian subtitles (stipulated by “Law on Television and Radio”)