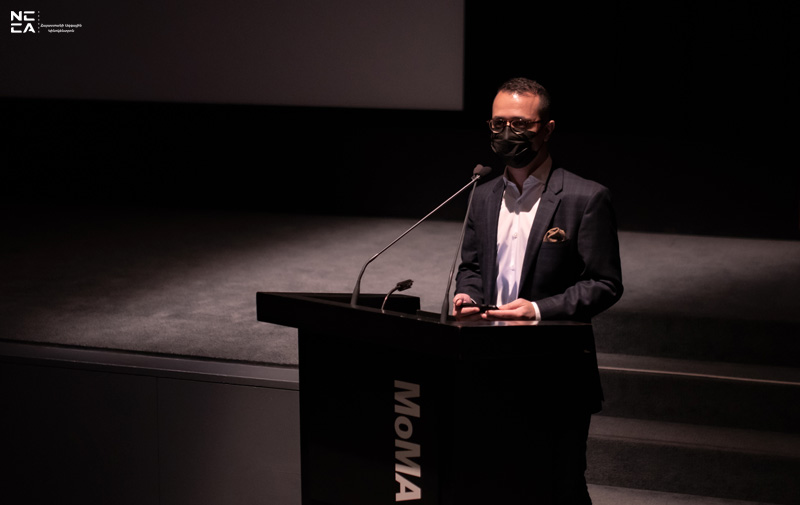 The newly printed 35 mm copies of the restored three short films by Sergei Parajanov HAKOB HOVNATANYAN (Armenia, 1967), KYIV FRESCOS (Ukraine, 1966) and ARABESQUES ON THE PIROSMANI THEME (Georgia, 1985) have been donated to the MUSEUM OF MODERN ART in New York, ensuring the irreplaceable presence of Parajanov's art in their collection. On this occasion, on January 19 and 20, 2022, MoMA presented to the art - loving audience Parajanov’s poetic documentary - "Triptych" as part of the program of the MoMA’s International Festival of Film Preservation "To Save and Project". The restoration of Sergey Parajanov's three short films was carried out due to the cooperation of the National Cinema Center of Armenia and Hamo Beknazarov Project. The restorations were funded by Fixafilm, within the framework of the Hamo Bek-Nazarov Project, with financial support from Kino Klassika Foundation. The transfer to 35mm was funded by AGBU, New York. One of the film sets is preserved in the National Cinema Center of Armenia, other two were donated to Georgia and Ukraine respectively. Other sets were handed over to the Museum of Modern Art in New York and Pompidou Center in Paris for their permanent collection.

It is noteworthy to mention that the ceremony of handing over Parajanov's "Triptych" to the Pompidou Center in Paris took place a month ago on December 15. To add, Parajanov’s HAKOB HOVNATANYAN is the first Armenian film to be preserved in these two major art centers of international importance - MoMA and Pompidou.